It is with great pleasure that the Association for Canadian Studies and the Metropolis Project at Carleton University are announcing that the 2013 National Metropolis Conference will take place in Ottawa from March 14-16, 2013. We are especially pleased to be able to make this joint announcement so soon after the end of Phase 3 of the Metropolis Project in March 2012 and the uncertainty that the ending of this project has created. We know that there remains considerable interest in comparative research, public policy dialogue, exchange and networking among the academy, civil society and all levels of government on the important issues of migration, immigrant integration, and population diversity both nationally and internationally. Therefore, we, together with an excellent team of people with a strong Metropolis history, are confident in going forward with the annual Metropolis Conference. This conference will bear many of the hallmarks of the conferences that Metropolis has become so well-known for, and it will also involve an evolution of these ideas together with the fruits of the welcome partnership between Metropolis and the Association for Canadian Studies. In addition, we have received expressions of interest and commitment from numerous organizations who wish to collaborate with us on organizing a first-rate and very stimulating event. The 2013 National Metropolis Conference will take as its theme, "Building an Integrated Society".  Its plenary sessions and workshops will continue to explore the research and policy priorities in the areas of immigration, integration, diversity and identities. This event, as in the past, will offer a unique opportunity for networking, knowledge transfer and capacity-building amongst policy-makers, civil society, academics and researchers to exchange ideas about migration, diversity and immigrant integration in Canada. Below is our call for proposals. Workshops will consist of four to five presentations of approximately 15 minutes each followed by at least 20 minutes of discussion. We warmly invite you to submit your workshop proposal no later than December 20th, 2012.  We look forward to hearing from you and to continuing the strong tradition that was developed through the Metropolis network. On behalf of the 2013 Metropolis National Conference Steering Committee, - Chedly Belkodja, Université de Moncton - Tracey Derwing, University of Alberta - Howard Duncan, Carleton University Jim Frideres, University of Calgary - Annick Germain, INRS - Luin Goldring, CERIS - Daniel Hiebert, University of British Columbia - Jack Jedwab, Association for Canadian Studies - Minelle Mahtani, University of Toronto - John Shields, Ryerson University - Madine VanderPlaat, St. Mary’s University - Lori Wilkinson, University of Manitoba - Lloyd Wong, University of Calgary 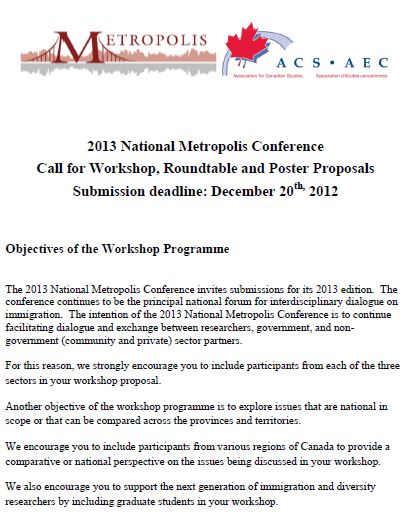